In February 2018 I watched a fascinating programme on BBC2 in a series about IKEA. It was in two parts: the first described the perfection of a production line that produced 4.5 million Billy bookcases a year in the most cost efficient and precise manner. The second took a perfectly manufactured mass-produced clay vase and showed how the designer then persuaded the bemused workers on the production line to deliberately ‘abuse’ it whilst lifting it from the mould so that their finger prints gave each a distinct character.
These two exercises seemed to raise the whole question of how craftsmanship is on the one hand seeking ‘perfection’ and yet is also valued because it fails to achieve it. Of course it may be an objective of the craftsman to deliberately exaggerate distortions of one sort or another as part of the ‘design’. But generally they will follow the characteristics of the material and execute what they are doing according to tolerances the material permits.
As Grayson Perry says ‘materials fight back’. Here we are not considering the design but what governs its execution and how this affects our and previous generation’s perception of the finished product. How is it that a medieval timber-framed building, which wanders around in a way that today’s building industry might find problematic, be acceptable to the craftsman who constructed it and be revered by us? Is it society’s ever- changing perception of created things?
Since time immemorial craftspeople have used tools and methods to try and meet self-imposed tolerances to thereby achieve accuracy. And yet the materials they use are capable of reaching a different level of accuracy when worked according to their particular characteristics. This is skill. The tolerances, which are achievable in working a material will vary not only according to the nature of the material but also in the degree of hand crafting or machine production. The contrast between the production of the clay vase and the Billy bookcases highlights the perceived problem of the crossover between the aspirations of the Arts and Crafts movement and its need to engage with mass production. 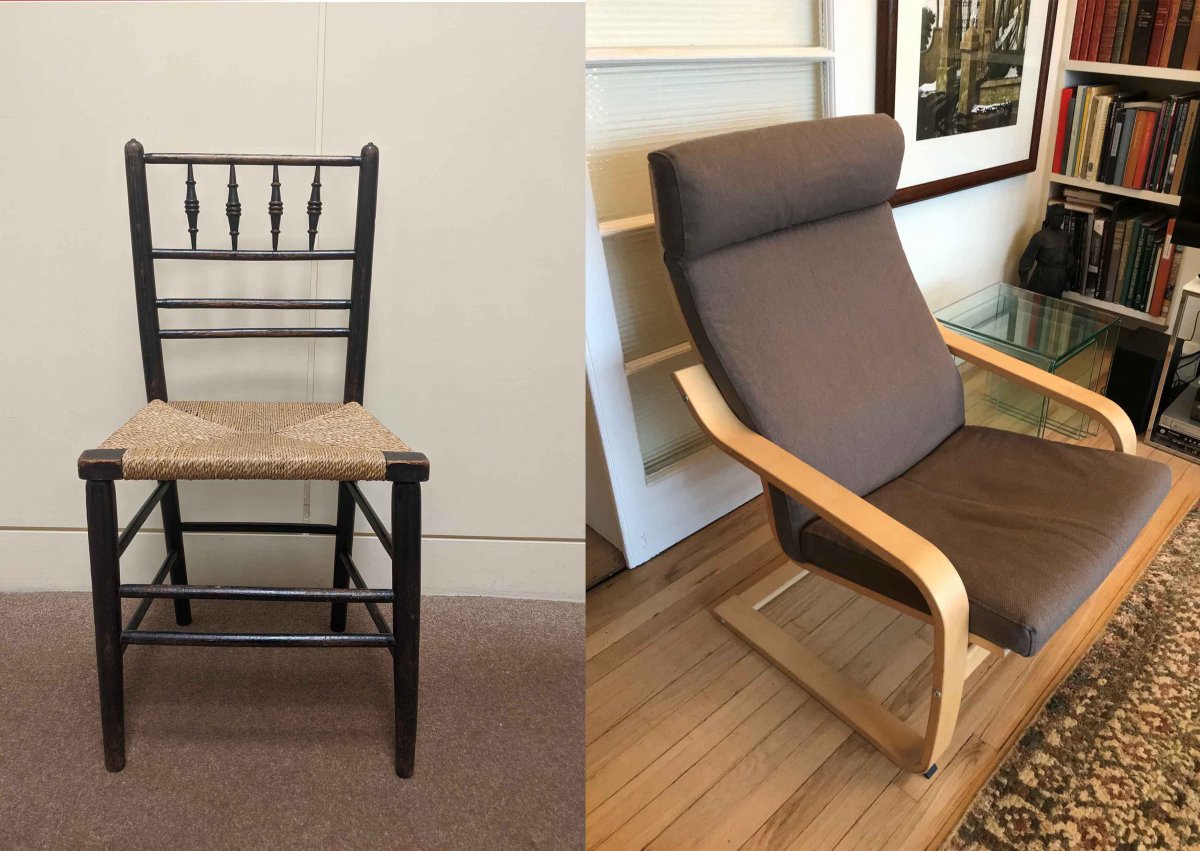 Left: Morris and Co. Sussex Chair. Right: IKEA Pello armchair
The current interest in the Bauhaus centenary has once again raised this dilemma. The moral imperatives of honesty and truth to materials and the emulation of mediaeval craft guilds espoused by Ruskin and Morris are present in the Bauhaus philosophy. The transfer of these ideas from Britain to Germany in the 1890s was highly influential. This was the result partly of contact established by Herman Muthesius, a German architect attached to the German embassy in London, with William Lethaby and other Arts and Crafts proponents. Muthesius went on to help found the Deutscher Werkbund in 1907 and influence the setting up of the Bauhaus in 1919. He supported standardization and mass production but in this he was in conflict with Henry Van de Velde, the founder in 1905 of the School of Arts and Crafts in Weimar, who considered that this stifled artistic creativity. So the Bauhaus inherited this conflict from the start.
The establishment of the Bauhaus foundation course, which gave students exposure to a variety of applied craft techniques eventually led to many of them being involved in mass production. In this respect, though starting from a handcraft base, they made the transfer to the machine in a way that the British Arts and Crafts movement partly by choice never did. Though supporters of the Arts and Crafts movement like Gordon Russell and Ambrose Heal did introduce machine production for their products.
It is remarkable how influential the Bauhaus was considering it was founded in 1919 and was closed by the Nazis in 1933. The subsequent diaspora spread its influence and had a profound affect on the teaching of design particularly after WWII. In Britain its immediate influence was negligible. One exception was the Isokon bentwood furniture range, produced by Jack Pritchard a patron of Modernism in the 1930s, though this was not rooted in the Arts and Craft movement but came direct from the Bauhaus emigres like Marcel Breuer. By adopting the framework of mass production with its demanding tolerances and different handling of materials their products were made more available (if you could afford them) to the mass market in a way that Morris yearned for.  But of course the individuality of the handcrafted object was sacrificed. The likes of Habitat and latterly IKEA with its mass market are the heirs to this aspect of the Bauhaus approach, though it is doubtful if Ruskin would have thought that a precision manufactured ‘flatpack’ wardrobe made of veneered wood pulp, though with a true understanding of the character of the material, would pass his moral test.
On the other hand, the SPAB is largely concerned with buildings rather than artifacts that predate the incorporation of standardised mass-produced components. Though components such as bricks and tiles would have been made in vast quantities but each ‘hand crafted’. Buildings tend to be one offs, all the more so in the period up to 1720 (the SPAB’s casework cut-off) when they were directly the product of craft skills with all their individuality and loose tolerances.  Latterly buildings have increasingly embodied mass-produced machine-made components with tighter tolerances. Today a building site involves fitting together components formed by craftsmen on the site with those equally crafted under factory conditions and each with its own set of demanding tolerances.  It is often at the point of contact between two components and their associated skills that problems occur but this has probably always been the case.
Buildings and artifacts just need to be designed and made with an understanding of the materials, and the best and most efficient way of using them. The skill of the craftsperson is applied to both the hand-crafted and mass-produced object. There should therefore be no moral dilemma about the loss of control as handcrafting crosses over into mass production, which was the concern of the Arts and Crafts movement for so long.
Peter Jamieson is a volunteer at the Friends of Czech Heritage,
If you'd like to submit your own viewpoint piece for consideration please contact press@spab.org.uk
Tags:
Arts & Crafts, Bauhaus, crafts 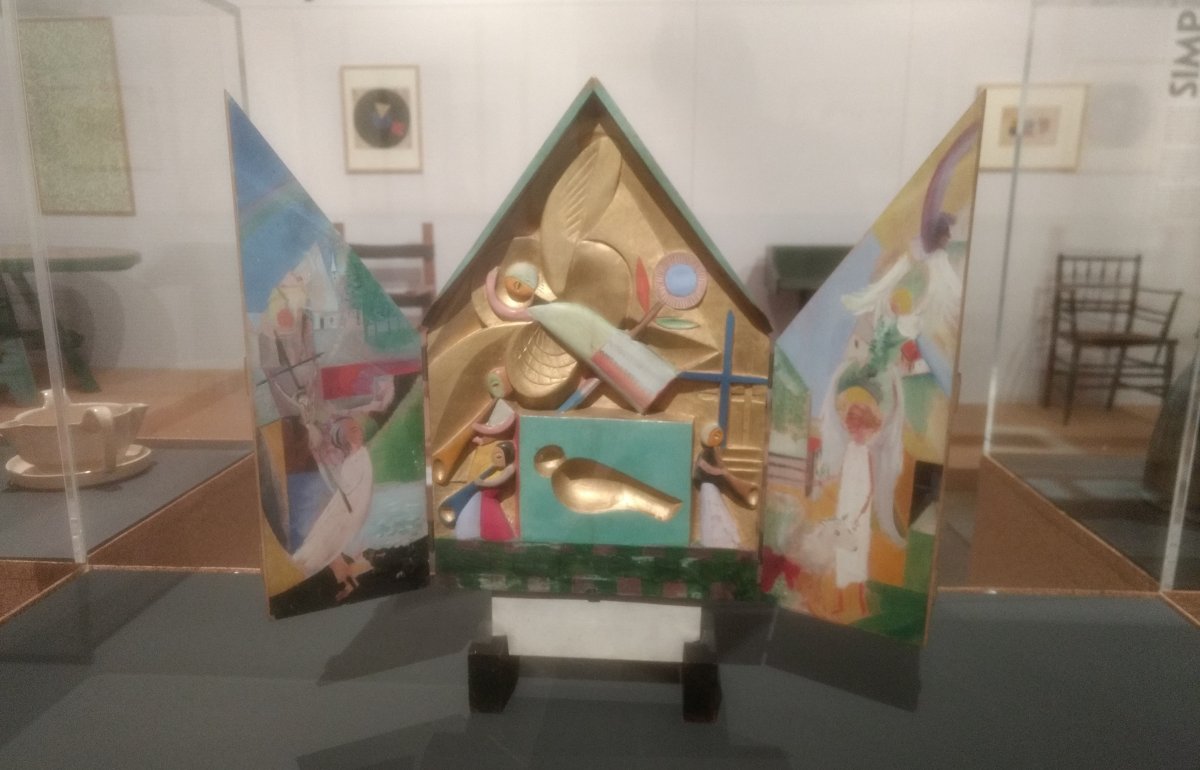