Prince Frederick Duleep Singh (1868-1926), is one the most interesting personalities from the SPAB archives. The younger son of the last Maharaja of the Sikh Empire, ‘Freddie’ Duleep Singh was a dedicated SPAB member and volunteer. He is pictured here in his Norfolk Yeomanry uniform. 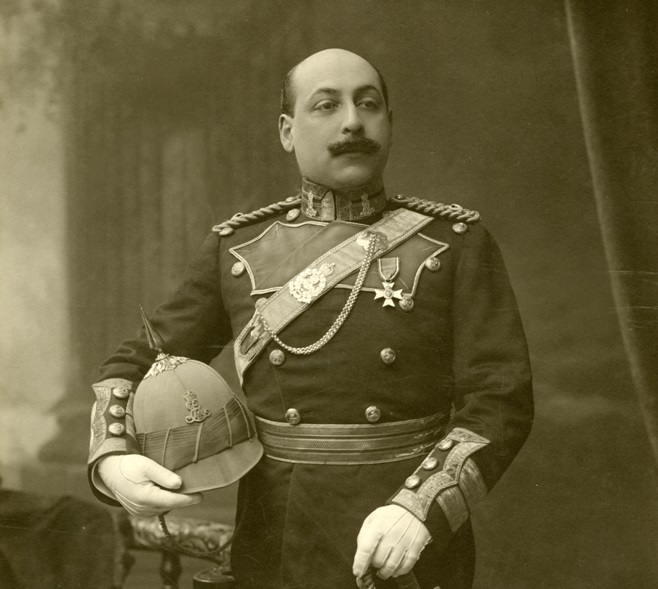 As SPAB Secretary, Thackeray Turner (1853-1937), wrote to the Prince in April 1898 to draw his attention to the proposed plans to rebuild the entire north section of the Thetford Town Hall, an undertaking the Society thought unnecessary and harmful to the ancient structure. The Prince spent the last twenty years of his life at Blo' Norton Hall, an Elizabethan manor in Norfolk. Turner called upon the Prince to use his influence in the area and, as he was a SPAB member of the SPAB, asked him to inspect the building on the Society’s behalf. With the Prince’s help the SPAB’s advice was taken up by the local authorities. The relationship between the SPAB and the Prince continued until his death in 1926 – there are 19 historic case files in the SPAB archive which contain letters and reports from him. 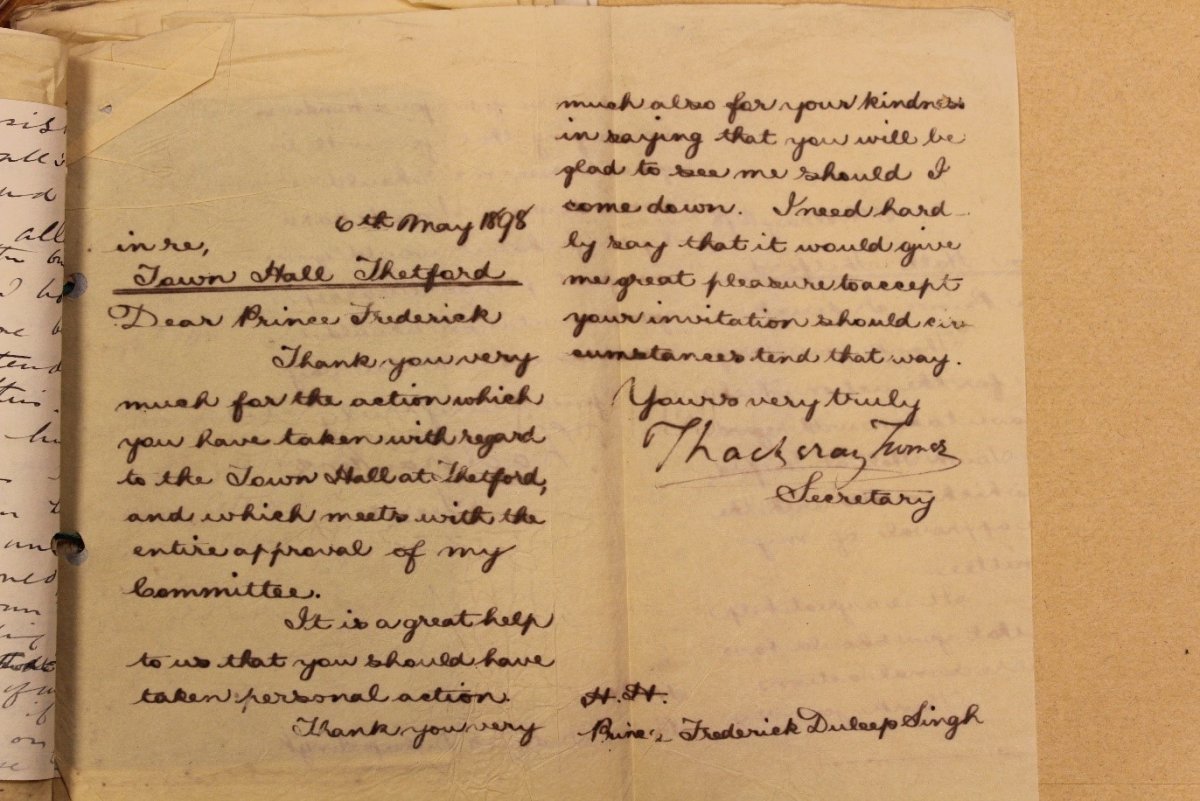 Our most notable collaboration with Duleep Singh was the repair and preservation of Ancient House,  a 15th-century townhouse on Whitehart Street in Thetford, Norfolk. In 1921, the Mayor of Thetford approached Prince Fredrick about opening a museum in the town. The Prince purchased Ancient House and presented it to the Mayor and Corporation of Thetford for this purpose – the Museum was opened in 1924 and it is now run by Norfolk Museums Service. 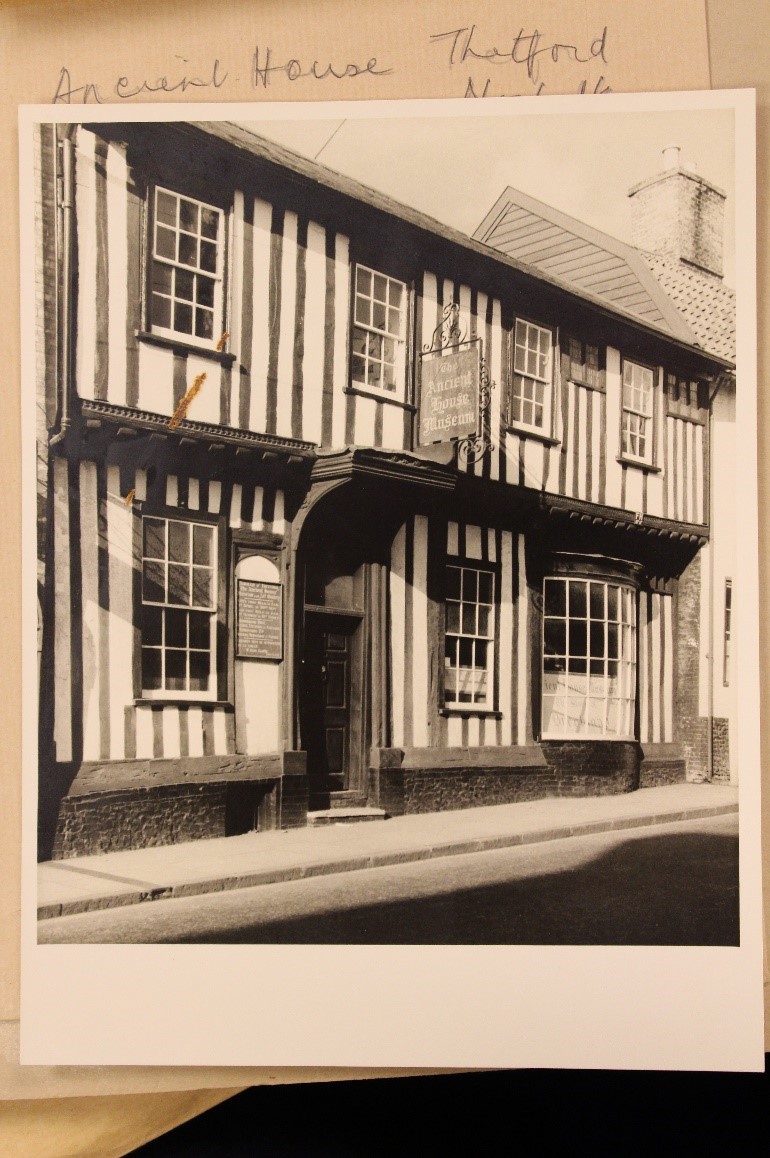 The Prince bequeathed many items to the Museum’s collection as well as funding the repair of the building, on which we were extensively consulted. On surveying the building in 1924 there was a panel above the first-floor fireplace which needed attention and it was suggested that a new wooden panel with an inscription of the building’s significance and brief history be commissioned. On consulting the Prince, it was decided to include the Thetford seal, which was thought to date from the 12th century. The new design was assigned to Joseph Armitage, a sculptor and carver, but the Prince had some suggestions of his own. He describes this as ‘a very crude sketch of the coronet’. 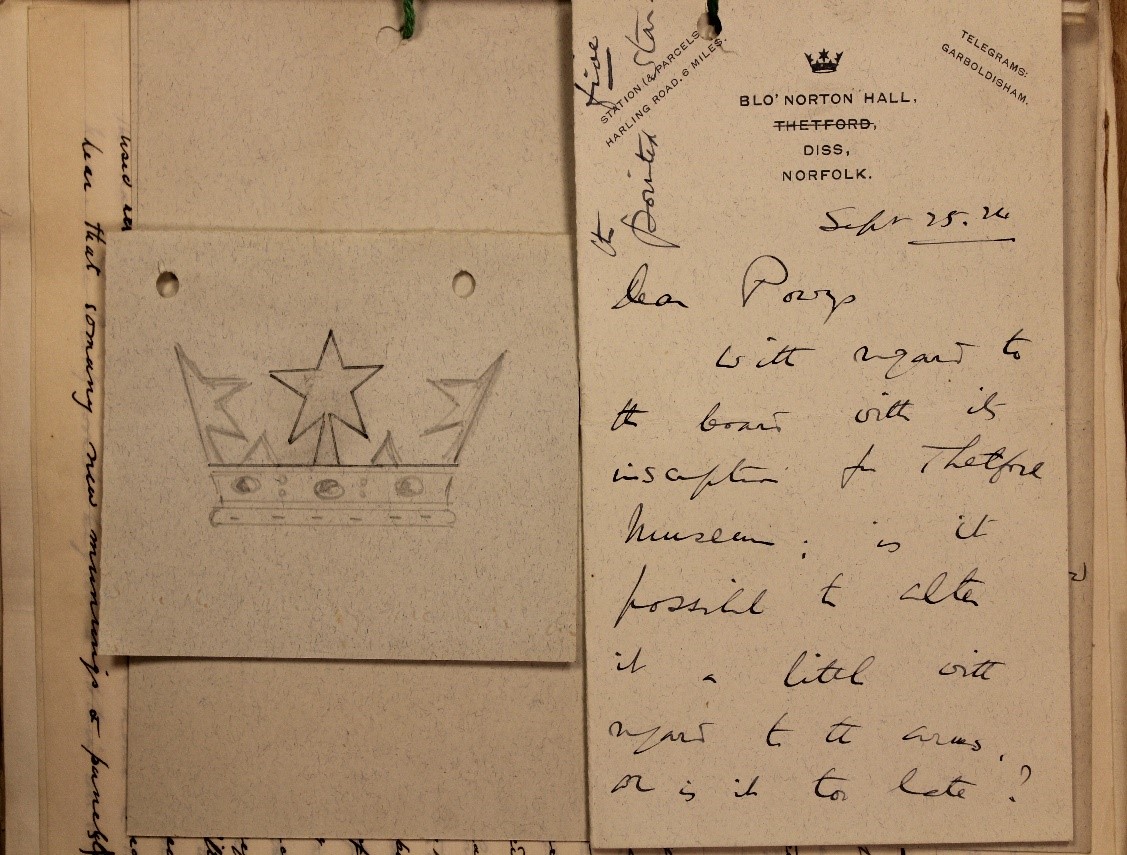 Prince Frederick’s hands-on approach seen here is demonstrative of his passion for ancient buildings. A long-time member of the SPAB, under his Deed of Gift of the Ancient House to the Town Council in 1921, it was stipulated that a condition of the Gift be that should anyone wish to carry out any structural alterations to the building, the SPAB must be consulted first. This has ensured the good condition of the building in the years since and the Ancient House today looks almost identical to the photo above from nearly 100 years ago. 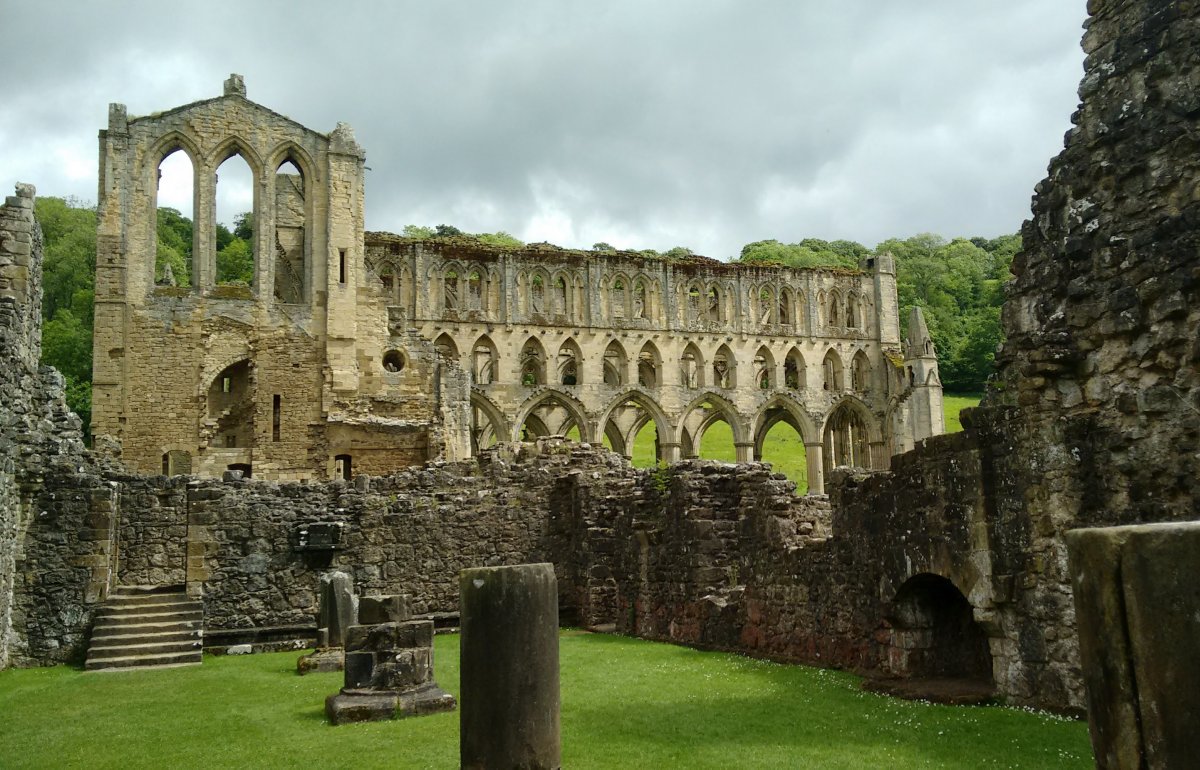 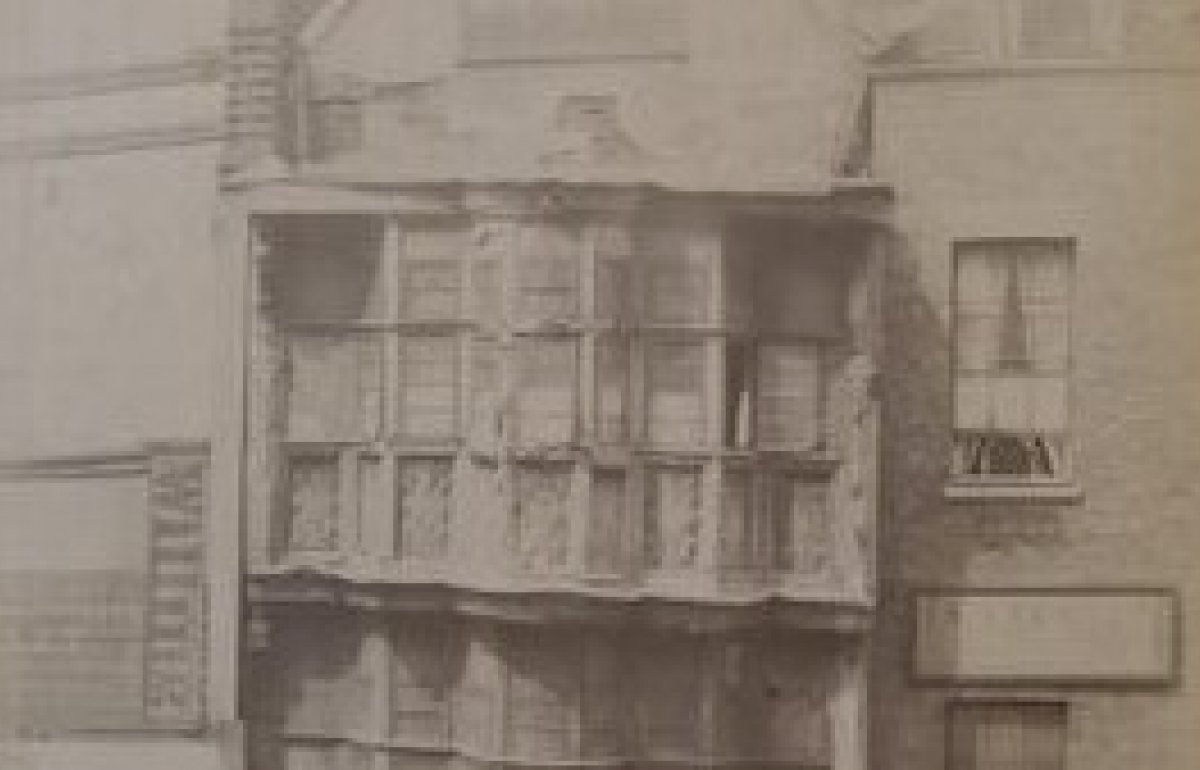 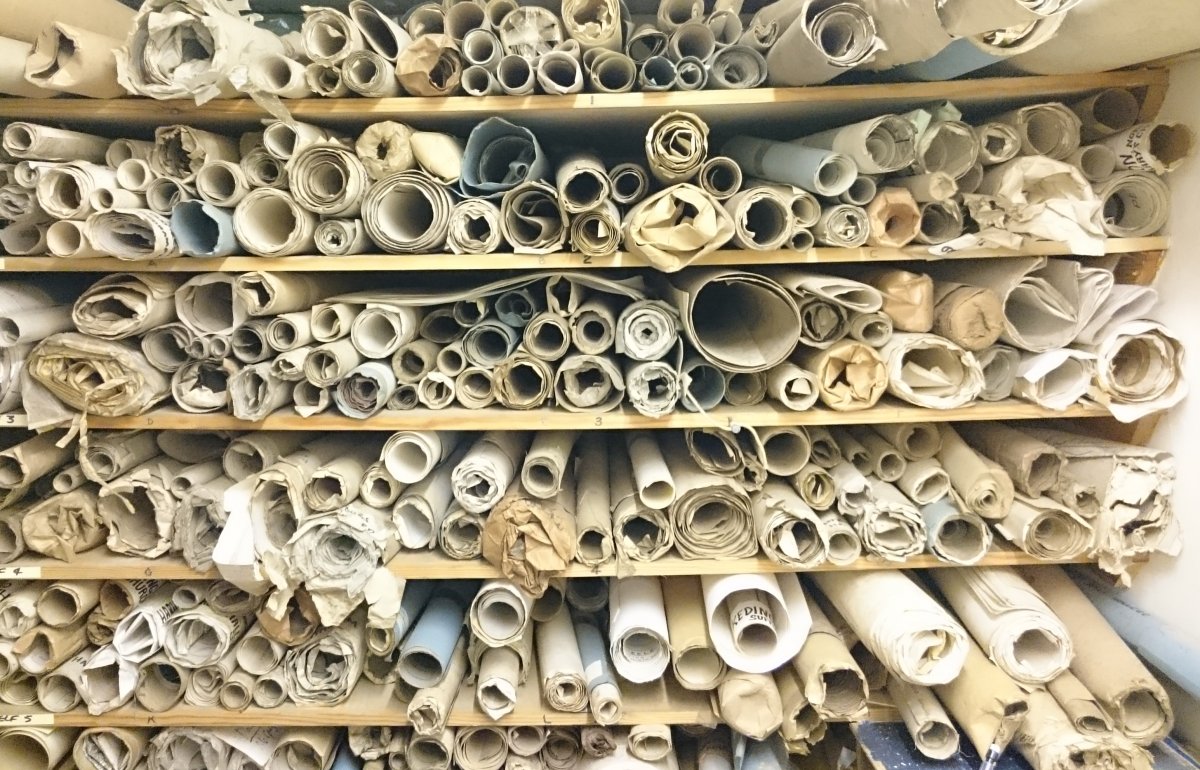