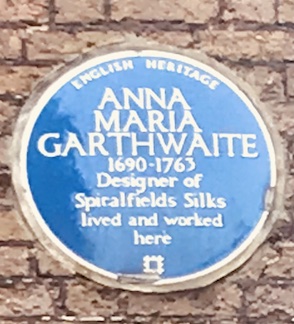 It is a well-known fact that the Spitalfields district of London was, during the eighteenth century, entirely populated by French Huguenot refugees, all busy weaving away in their loft workshops, producing gorgeous silks for worldwide trade, and breeding auriculas and other ‘florists’ flowers’ (cuttings and seeds of which they had brought with them as they fled across the Channel) in their leisure moments. As with many well-known facts, this is true only up to a point. Consider, as a counter-factual, the career of Anna Maria Garthwaite, spinster daughter of an Anglican clergyman, whose designs for woven silk (many of them happily preserved in the Victorian & Albert Museum) were hugely important in the success of the silk industry.

Since I like nothing better (in London and in good weather) than a potter around Spitalfields (taking in a browse and a coffee at the Town House in Fournier Street), I was already aware of Garthwaite’s house and blue plaque on Princelet Street, but I have found out a lot more since reading Portrait of a Woman in Silk: Hidden Histories of the British Atlantic World, by American historian Zara Anishanslin. This is an ‘object biography’ of the portrait in question, which appears on the book’s cover, and the first part discusses what is known of the artist who designed the pattern of the silk dress the American woman in the portrait is wearing. It is a very interesting read, though marred by a tendency to repetition which a good editor would have sorted out, and – ridiculously in a book on a visual topic – the disappointing number of (only) black-and-white illustrations.

Not very much is known about Anna Maria Garthwaite, who was born on 14 March 1688 to Ephraim Garthwaite, rector of Grantham, Lincs., and his delightfully named wife Rejoyce. She was the middle child of three sisters, all of whom seem to have been well educated, as might have been expected for a gentry family which occasionally touched the fringe of nobility, and her particular artistic skill was perhaps foreshadowed (like that of her younger contemporary Mrs Delany) in a papercut which she made in 1707.

As Anishanslin points out, as well as being a skilful piece of work, the picture is relatively unusual in that each of the twenty-plus trees depicted is given an individual shape and distinctive leaf/flower forms – indicating both a good eye and a knowledge of botany. Some of her early embroidery designs show the same botanical features, and by 1726 she was already collecting and commenting upon professional designs, including some of French origin. 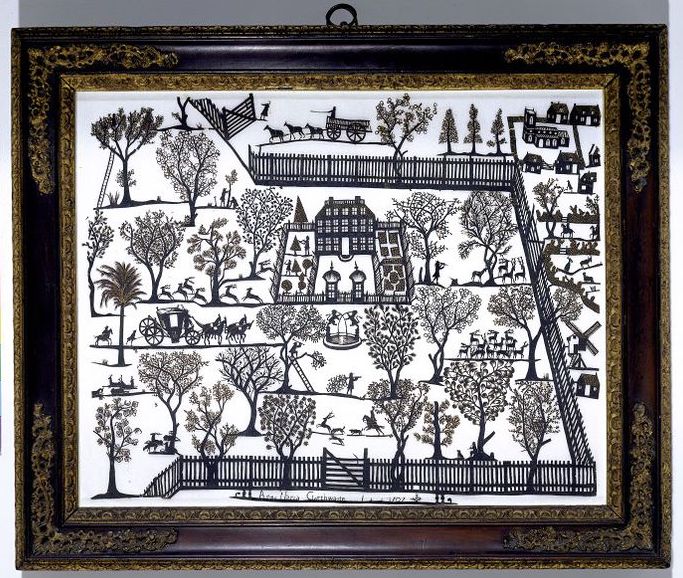 Garthwaite’s father died in 1719, and she moved to live with her elder sister Mary, who had married as her second husband Robert Dannye, the rector of Spofforth, near York (her first husband had held the same benefice). It is conjectured that visits to York increased her knowledge of textiles and fashion. However, Dannye died about 1729, and it was at this point that she and her sister moved south, finally settling in a house in Princes Street (now Princelet Street) in Spitalfields, then just outside London.

Sadly, we have no idea what influenced her decision to make her living as a professional designer; however, her younger sister Dorothy had married another Grantham clergyman, Edward Bacon, in 1724, and his brother, Vincent, who was an apothecary and botanist, lived nearby (though he himself later moved up to Grantham). (Thomas Martyn, in his Plantae Cantabrigiensis, or, A catalogue of the plants which grow wild in the County of Cambridge … (1763) names him as one of ‘those Men, who, though they never published any Thing, upon the Subjects, have nevertheless contributed in some degree to improve this part of the Natural History of their Country’.) 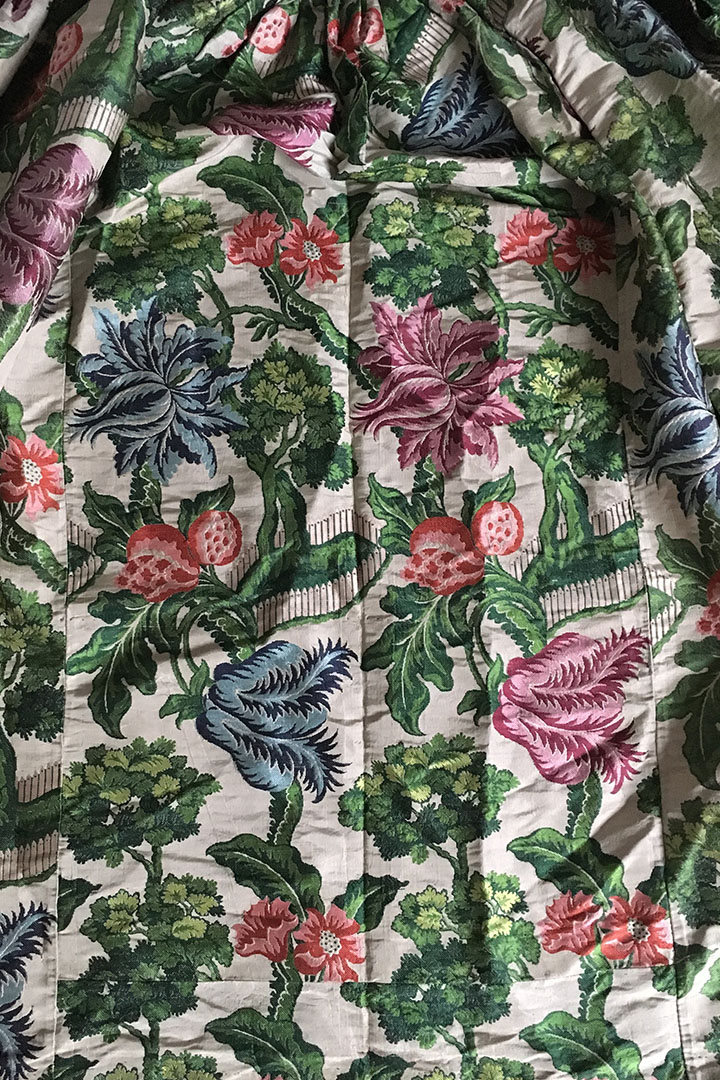 The fabric for this 1730s dress was almost certainly designed by Garthwaite: note the trees and fences, very similar to the paper-cut above. (Credit: Meg Andrews)

That Garthwaite and Bacon were close is indicated by the fact that he nominated the sisters as guardians of his daughter Mary in the event of his death. Vincent was, unusually, a member of the Barber-Surgeons’ Company as well as the Society of the Apothecaries, and was also elected a Fellow of the Royal Society in 1732 (one of his sponsors being the astronomer Edmond Halley), publishing in the Transactions of 1733–4 an account of a man almost poisoned by a salad containing monkshood which he had picked in the garden believing it to be celery.

It seems likely that he had a role in introducing his sister-in-law to his scientific acquaintances (among whom he counted Philip Miller of the Chelsea Physic Garden), but it is less clear how she acquired the technical knowledge of silk-weaving which enabled her to produce designs which could actually be executed.In Princes Street, of course, Garthwaite was surrounded by master weavers, who presumably were able to advise her on what would work and what wouldn’t; she seems to have been close to the Campart family of ribbon weavers (to whom she left a bequest in her will), as well as to Simon Julins (1687–1751), who commissioned many patterns from her. She came to specialise in silk brocade, a type of weaving that introduced additional weft threads (sometimes of gold and silver) to the basic weave, giving the pattern both extra colours and a visual depth. 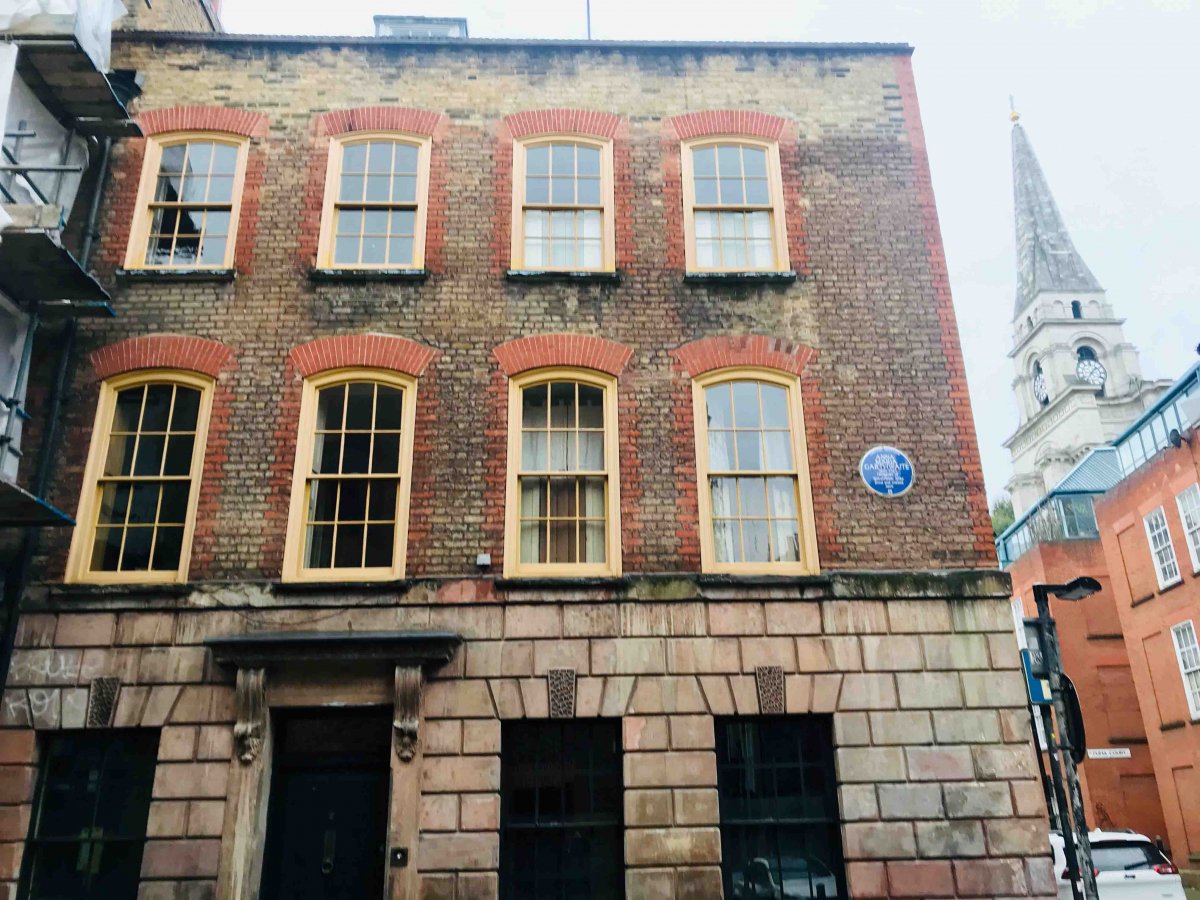 Garthwaite was extraordinarily prolific – at the height of her career in the 1740s, she sometimes produced four or five designs a week. She was also famous for her work: in the Gentleman’s Magazine of July 1749, it is almost certainly she who is described (in an article urging the institution of a Royal Academy which is also in part an anti-French diatribe) in the following terms:

Oft have I admired the beautiful disposal of colours and flowers in of brocade etc. exhibited to view by our silk mercers.  But these I am assured are indebted for their being the skill of foreigners … With regard more particularly to the art of Drawing and Colouring so far as it is a manufacture and relative to trade  …  our mercers now send their silks to Vienna and many other foreign courts where the excellence of English brocades is distinguished and applauded, and this excellence arises from the judicious disposition of light and shade, the elegant designing and correct drawing of the model or pattern for the loom, which is the work of an English and even a female hand. Our incomparable countrywoman by the force of mere natural taste and ingenuity has made the English Loom vie with the Italian Pencil, very different from the gaudy patterns of the French, who have never yet, with all the assistance of their Drawing Academy, been able to exhibit proportion or just colouring, on silks or linen in any single flower, much less to arrange a number of leaves and flowers and other ornaments so that each shall have an apparent relation to the other and from an union and harmony of part, produce an whole.  We have long heard of the performance of this extraordinary person and have seen a most beautiful new-flowered brocade from her drawing which would deserve a frame as a picture, and with which nothing manufactured abroad can be put in competition We are also informed that many thousand pounds have been gained to the national stock, and a vast number of hands employed by her means. … 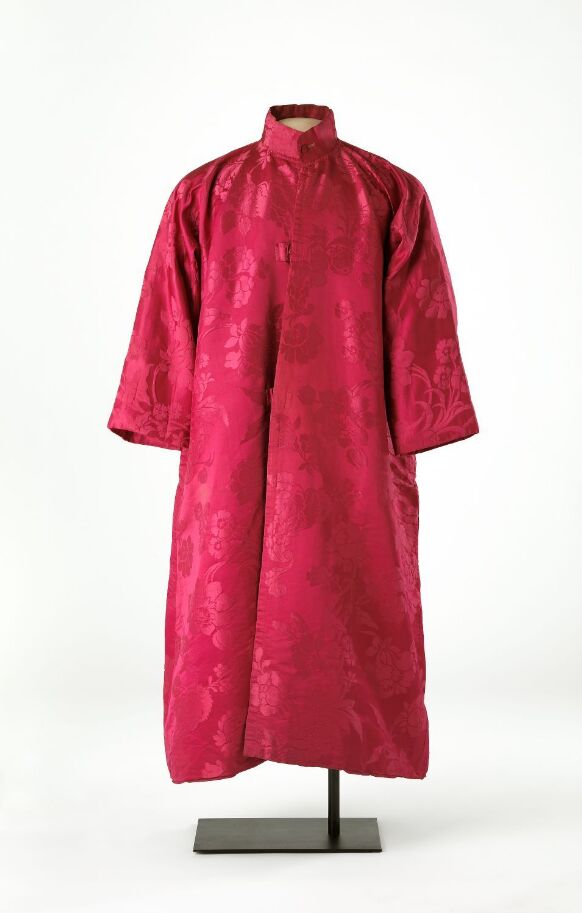 The fabric for this ‘banyan’, or dressing gown’, was designed by Garthwaite and woven by Simon Julins. (Credit: The National Museum, Oslo)

It has also been suggested that she wrote A short Introduction to the Art of Drawing in general; with an Essay on designing and drawing Patterns for the Flower'd silk Manufactory, Embroidery, and Printing, which appeared in the 1759 edition of The Laboratory; or, School of Arts: in which are Faithfully Exhibited, and Fully Explain'd, edited by one Godfrey (or possibly George) Smith, about whom not much seems to be known. (The book gives detailed instructions on how to make everything from gold jewellery to fireworks, and also includes a long section on the dyeing of threads and textiles.) 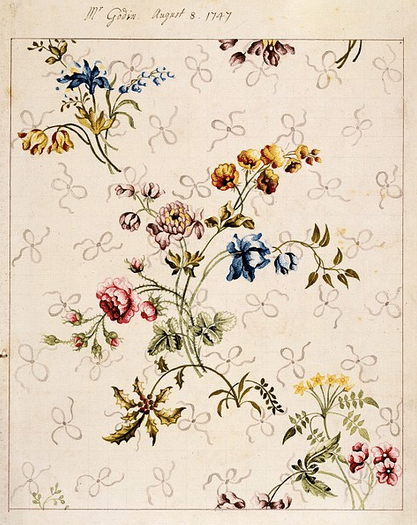 One of Garthwaite’s designs from 1747, commissioned by James Godin (c. 1697–1762), who like Julins was a Huguenot master weaver. (Credit: the Victoria & Albert Museum)

Garthwaite’s productivity declined in the 1750s (perhaps her designs were going out of fashion – though silk dresses were of great value, and were frequently remodelled to match the latest style as much as twenty years after they were first produced), and she made her will in 1758. It is not known when she died, but her will was proved on 24 October 1763; her estate was valued at about £600. She was buried in the cemetery of Christ Church, Spitalfields, the church which she could see from her house, and at which she worshipped, along with many of the master weavers who were her customers and friends. 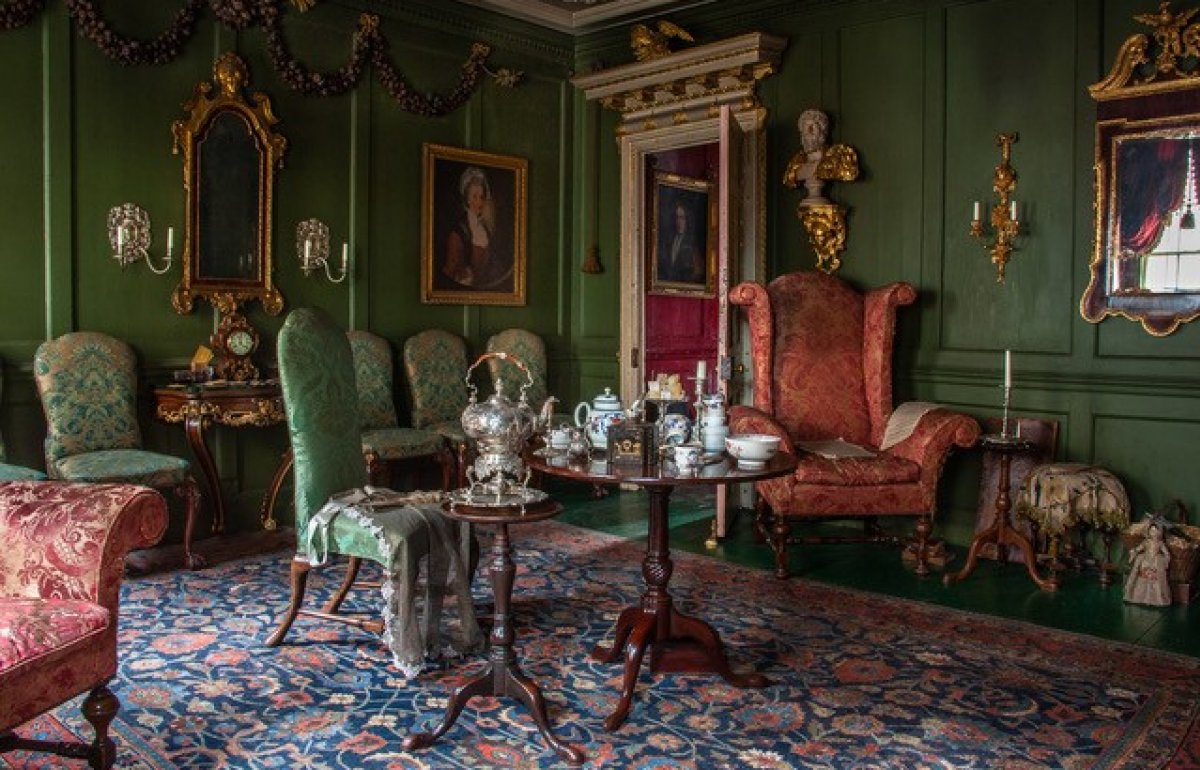 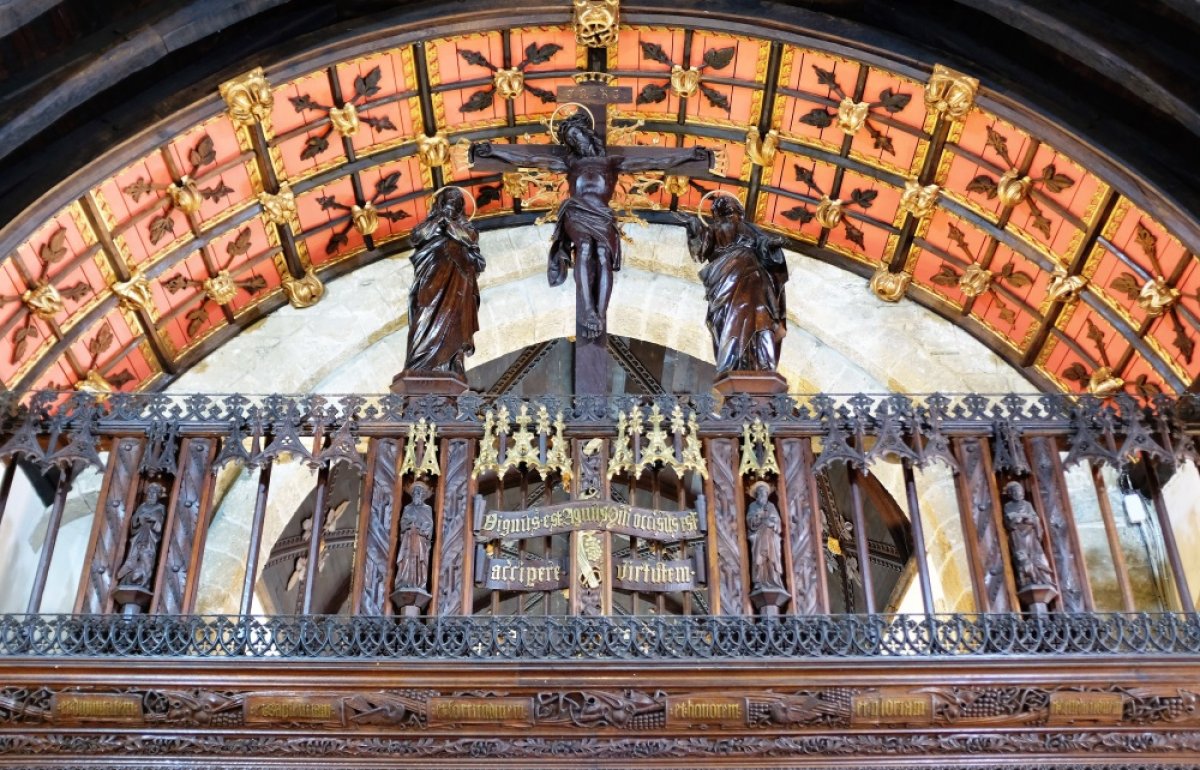 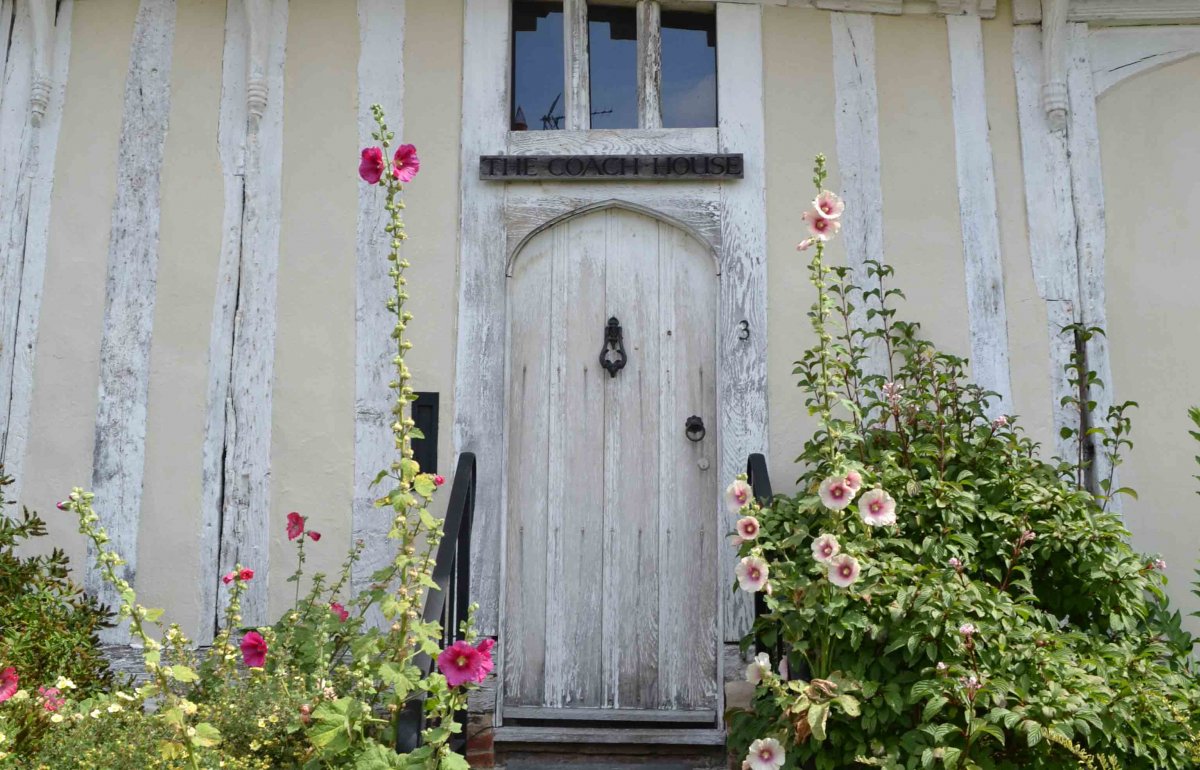