The future of a hugely significant Devon longhouse dating from the late 14th century was made more secure this weekend after a group of volunteer architects and building craftspeople, alerted by SPAB, gave their time to carry out vital repairs.

The 22-strong group assembled at the Grade II*-listed building - situated on the borders of Exmoor National Park between Barnstaple and Tiverton* - to carry out essential  work to prevent the remote medieval farmhouse from passing a point of no return.

Each year SPAB, Britain’s oldest and most practical conservation body, deals with hundreds of old buildings facing threat – whether through inappropriate development, ignorance or neglect. The Exmoor longhouse came to the Society’s attention through its Casework team which helps and protects buildings in need.

Recognising the importance of this remarkable survival, SPAB contacted Historic England and the local authority conservation officer for permission to assist and gained local support. Within days, in the depths of January, a group of expert volunteers travelled to Devon from far afield to carry out a targeted schedule of ‘guerilla’ conservation. (Full details in notes to editors below)

Emma Lawrence, SPAB’s head of casework, said: “The farmhouse was at serious risk. Our main aim over the weekend was to make it watertight and head off the worst structural threats to ensure it doesn’t suffer further damage or even the possibility of total collapse over winter. When we left on Sunday we’d made a huge and positive difference.”

Work carried out included propping perilous walls in the farmhouse and adjoining linhay, repairing the roofs, dealing with rain water drainage and covering elements of the earth-built building exposed to the weather.

The farmhouse is a remarkably unspoilt example of a medieval cob dwelling. Probably dating from the 14th century – the period after the Black Death - the building also incorporates elements from remodelling carried out in the late 16th or early 17th century and has a long and fascinating story.  A closed truss at the upper end of the hall is an extremely rare example of its type, so rare, in fact, that only two others are known to exist in Devon. These are to be found in medieval buildings in Kennerligh and Tedburn St Mary.  However, the truss in the threatened building is the only complete survivor making the farmhouse regionally important.

Sadly, the building’s current plight is an example of an all-too common story. When the last person to live there died in 2009 the farmhouse was left unoccupied and subsequently fell into a state of significant disrepair. Despite the best efforts of the executors, there is still uncertainty as to its ownership.  In addition, abandoned to the elements, it simply fell off the radar of various authorities. Thanks to SPAB’s intervention it has now been placed on Historic England’s Heritage at Risk register and the Society is working with the support of HE and others who live locally to save the building from further collapse. 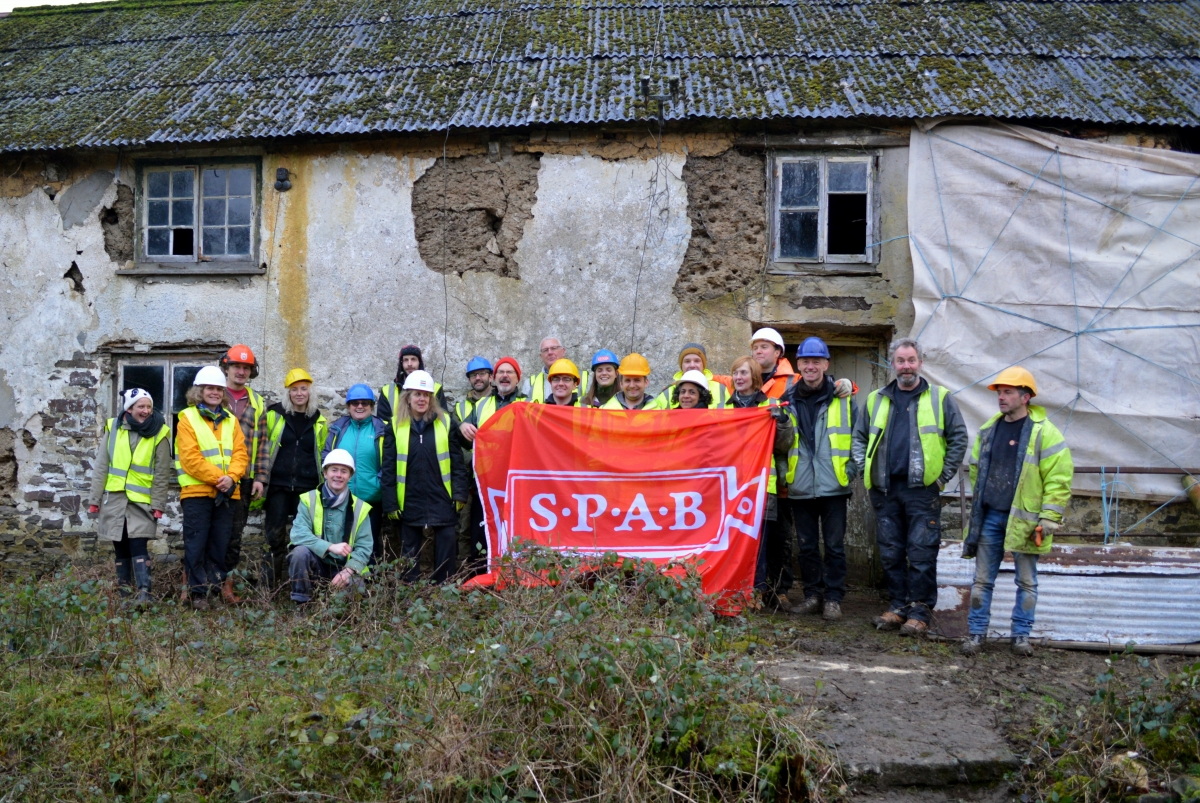 “With a hard winter ahead, its poor condition meant that we had to take immediate action. As a charity we have a huge network of tradesmen, architects, surveyors and people passionate about preserving Britain’s historic buildings. We put out a call to arms and quickly gathered together a group of expert volunteers who were more than willing to spend two days carrying out immediate remedial work which would ensure this amazing house makes it through to spring intact.”

The future for the farmhouse remains in the balance as a plan is developed for its future ownership and use.

Emma Lawrence concludes: “The SPAB has existed for 140 years. Our main message has always been that decay can be halted through maintenance and careful repair. Unfortunately this wonderful farmhouse has fallen victim to neglect and the weather. SPAB is an organisation uniquely placed to act with agility and purpose to save a building in a perilous state.  We have the expertise and support of dedicated members, supporters and staff and, in this case, were able to mobilise a ‘guerrilla’ working party using donated time, tools and materials to prop perilous walls and make the building watertight until more long-term works can be undertaken. We continue to support all the stakeholders involved and are in discussions over the future of the building.”
ENDS

Work carried out over the weekend:
1 Urgent Works - Immediate
1.1 - Propped west bearing and beam - 100% complete
1.2 - Supported underside of floor joists - secure and 50% complete
1.3 - Inspected pipework to water tank and endeavoured to move pipework away from the north wall of the barn - secure and 50% complete
1.4 - Repaired both roofs with corrugated metal sheeting - 100% complete
2 Propping to allow access for recording
2.1 - We cleared the Hay Barn Mezzanine of all abandoned farm debris and rubbish in order to reduce weight on the structure and allow the timber structure to dry out from the many historic roof leaks. No further structural propping was undertaken as we felt it was not need at this time.
2.3 - Photographs of the farm taken in the 1970s appear to show that the debris located outside the shippon is the old south facing cob and stone wall that once contained the internal shippon end. We therefore left this material as found as it needs to be recorded in situ and reused in any future repairs and reinstatement.
2.4 - We did not enter the shippon building but we carefully supported and secure the shippon's beam ends with the limited miscellaneous propping material we could find on site.
2.5 - The decision was made on site to strap up using rope the north beam / rafter joint of the west complete truss and in a controlled manner allow the partially hanging truss to be lowered to the ground and the complete slates to be stack to one side outside the barn - 100% complete

3. Long-term temporary protection
3.1 - We did not prop the timber posts as we propped the main beam instead as per 1.1 above.
3.2 - We temporarily shored up the cob wall on the north side between the shippon and the main house incorporating timber props to lightly support the window head too.
3.3 - We removed the tree growing on the south wall top of the hay barn and poisoned the roots. We did not remove the ivy on the north side wall head as we believed it was providing some protection to the wall head and if cut back could grow quickly again and cause further root damage to the wall lower down. Following great discussion we did not cover the exposed wall heads of the barn as we felt this was difficult to secure and could prove dangerous to people below.
3.4 - Where possible on the hay barn we put back slipped slates to stop rainwater leaking onto the mezzanine floor below.
3.5 - We  carefully worked around the broken asbestos roof to undertake repairs to the main roof of the hay barn and milking parlour.
3.6 - We put back the missing roof covering on the main house.
3.7 - We put back the missing corrugated metal roof sheeting on the shippon.
3.8 - We covered and protected the partially collapsed cob wall on the south east corner of the main house with tarpaulin. We decided to leave the exposed cob wall on the north east corner of the shippon as we had provided an extended roof overhang above using corrugated metal sheet and felt that the cob below need to be aired to dry quickly.

Other areas of repair covered over the course of the weekend are as follows:
South wall of the main house:

North wall of the Shippon, Main House and Hay Barn:

SPAB is Britain’s oldest building conservation body. It was set up by William Morris to oppose the destructive restorations of the Victorian era and promote the alternative of “conservative repair”. By law it must be notified of applications to demolish listed buildings in England and Wales and comments on hundreds each year. Today its broad remit is to advise, educate and campaign. The Society, a registered charity, also trains architects and craftspeople; produces a range of helpful publications and campaigns on issues affecting our built heritage. Follow us on Twitter @SPAB1877 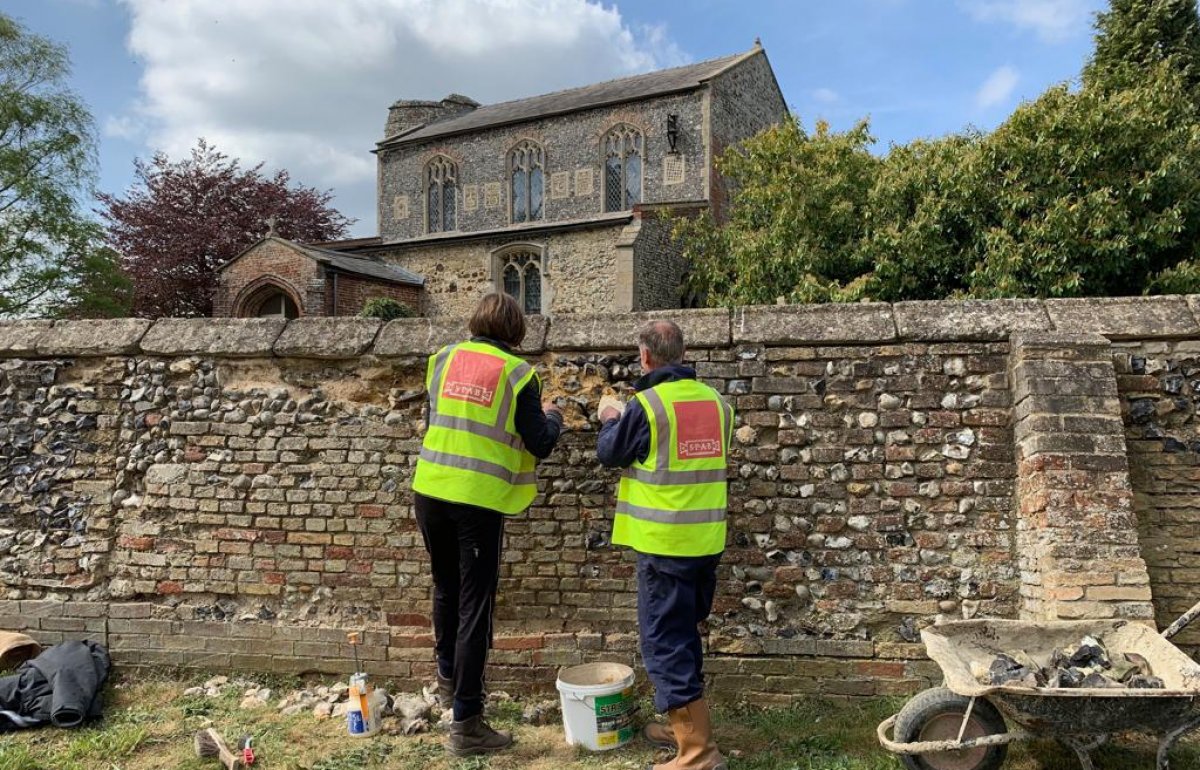 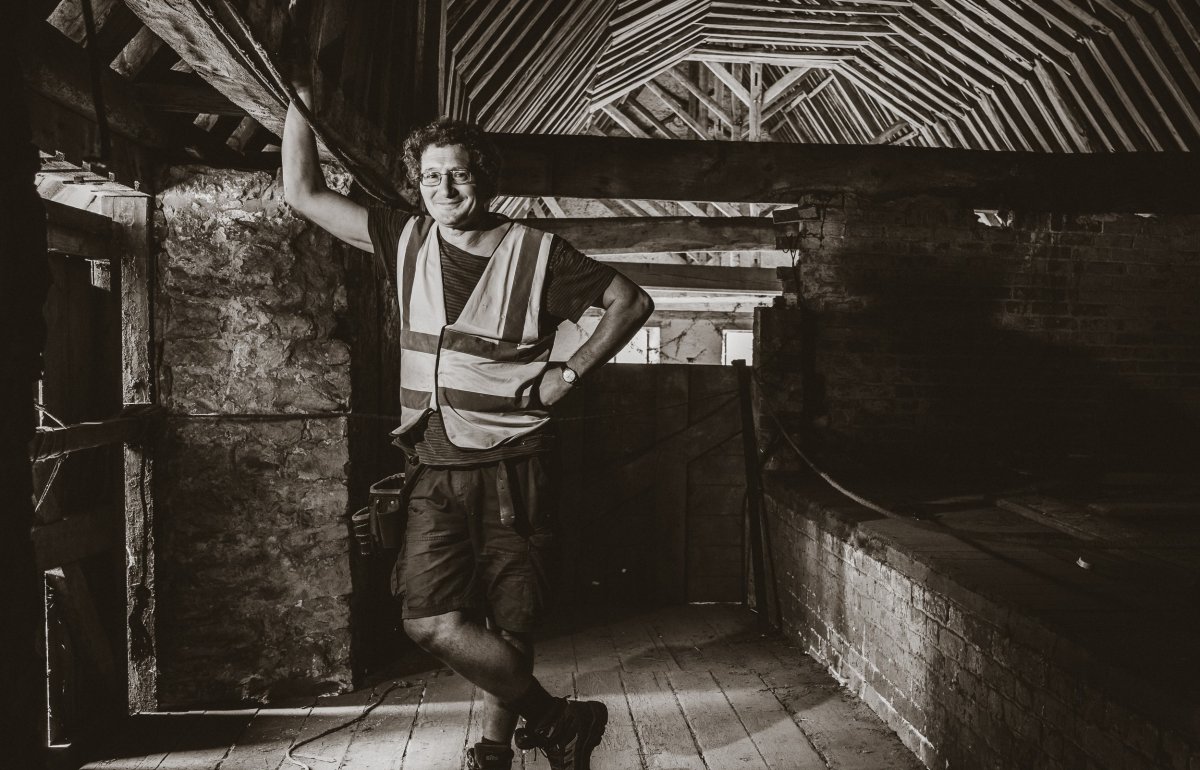 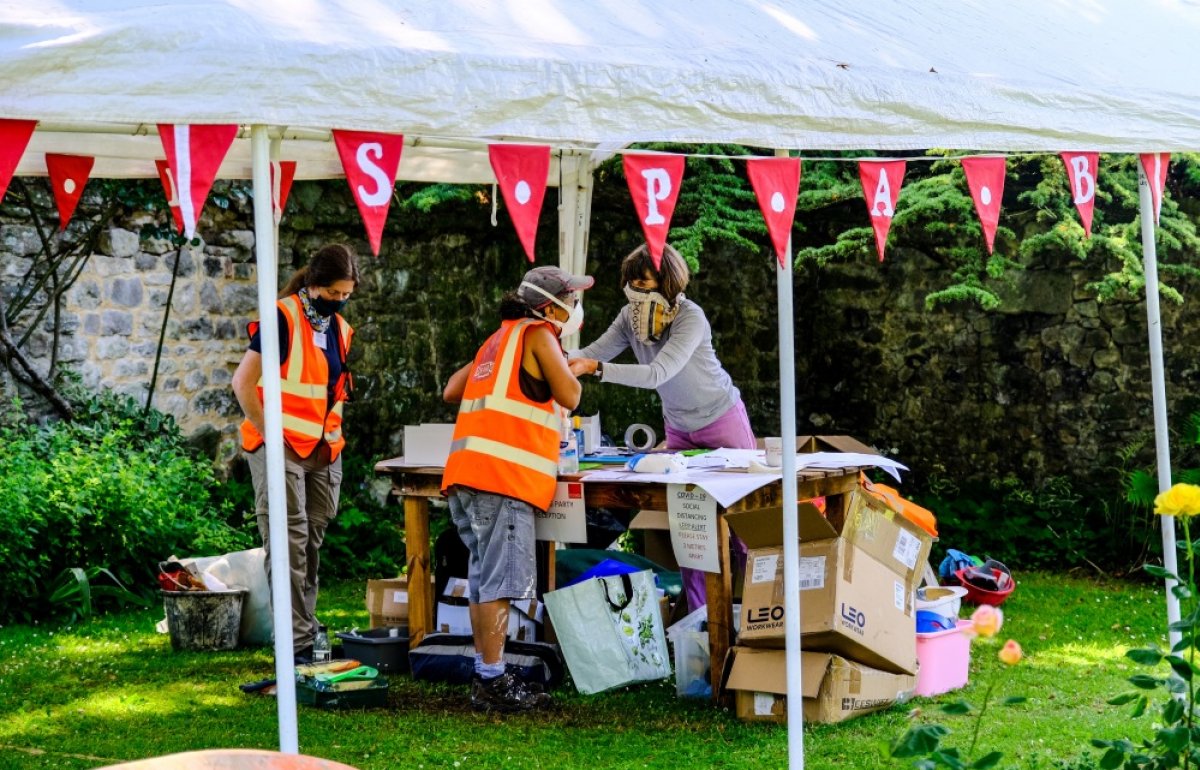